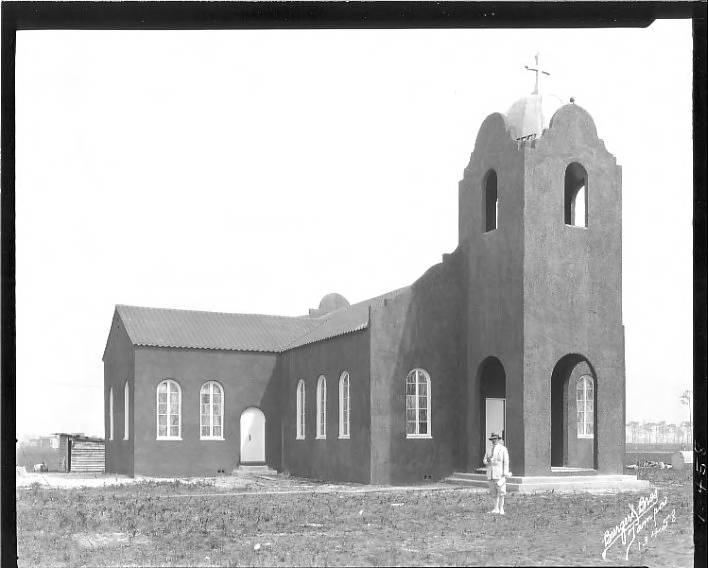 In August 18, 1935, Mary L. Shumate, the wife of Rev. Dr. L.H. Shumate, wrote the following historical sketch about the “Methodist Episcopal Community Church” of Oldsmar, going back to its organization in the year 1918 when R. E. Olds was promoting Oldsmar’s goodness to the people in Michigan. Rev. Dr. L.H. Shumate was the second minister of the “Methodist Episcopal Community Church” which is known today as the “Community United Methodist Church of Oldsmar.”

“In the year 1918, Oldsmar, a new town situated on the arm of Tampa Bay, between Tampa and Clearwater, wanted a church organization.  The town was founded by Mr. R. E. Olds, of the Reolds Corporation, of Lansing, Michigan, and Mr. Fred Cook, a prominent Methodist layman, of Detroit, was superintendent of the project.  By special invitation from Mr. Cook, our Church began work.  Rev. G. E. Bennett, who was stationed at Tarpon Springs, and who was the nearest Methodist preacher, was authorized to organize, which he did, holding services on Sunday afternoons in an unfinished bungalow, which was also used for school purposes. According to the original plat of 1918 , the house at 313 Jefferson Avenue, was a structure which housed the original school in town.  Later it served as the Methodist parsonage whose first occupant was Rev. Dr. L.H. Shumate.  Shed dormers on both the north and the south extend out of the gambrel roof, typical features of a wood frame Bungalow. This was taken from The Armadillo Walk, An Architectural Walking Tour of Historic Oldsmar.

At the following session of our Conference, Rev. Dr. L.H. Shumate, of Sebring, Florida, was appointed as pastor, together with Port Richey, another new organization, and he was expected to build a church in Oldsmar.

He found the situation rather problematical—the residents having come from different churches, and as there were very few Methodists on the ground, he considered it the better part of wisdom to strive for a Community Church, saying to those who preferred a “free lance,” that he thought some denomination should be behind the work, not insisting upon his own church, and the Board decided that since the Methodists had commenced operations the Methodist Church should be behind the work.  Hence the name—“Methodist Episcopal Community Church of Oldsmar.”

In the mean time services were continued in the bungalow, above mentioned, until the completion of the bank building, after which, for some length of time, all Church services were held in Assembly Hall, a spacious room on the second floor of this building.  However, there are those who found it difficult to climb the long flight of stairs, and we returned to the unfinished bungalow.

Dr. Shumate served as pastor until 1921, at which time he was appointed Superintendent of the Tampa District—a new district lying largely within the Everglades, and after Conference Oldsmar came into this District.

During Dr. Shumate’s six-year term on the District, he continued his residence in Oldsmar, ever keeping in mind and heart the building of the Church, which was finally accomplished in 1924-1925, and was completed under difficulties owing to the National Depression beginning at that time.  The Church was dedicated March 8, 1925, by Bishop Richardson, the Reolds Farms Company having previously donated the lots.

The parsonage property was also acquired during these years.  The Reolds Farms Company having sold out most of their holdings, the New Company placed in the bank for us a warranty deed to two lots and an unfinished bungalow, which was later finished for a parsonage, and it is interesting to recall that this was the “unfinished bungalow” in which our first services were held.

Returning to the year 1921, Rev. B. F. Sheffer, of the Nazarenes, was appointed to succeed Dr. Shumate.  Mr. Sheffer served one year, and was followed by H. H. Black, who remained nine months, and the Rev. Geo. E. Northrop, (retired), was secured to complete the Conference year.  He was reappointed and served two years longer, endearing himself to the people.

After Mr. Northorp came Rev. Rolla E. Hiller, we served faithfully and courageously for three years, and was succeeded by the Rev. J. V. Robinson, (retired) , who did good work for a year.

In 1929, Dr. Shumate having taken the retired relation, was returned as pastor succeeding Mr. Robinson, and served the Church until his death, September 25, 1933.

The work laid down by Dr. Shumate was continued for a few weeks by Rev. Dr. A. A. Mohney (retired) of St. Petersburg, and later by the Rev. J. V. Robinson, (now a resident), who completed the Conference year, doing so with difficulty owing to the temporary loss of his voice.

At the following session of Conference, Franklin Eifert, a student preacher, was appointed.  After a year, Mr. Eifert was succeeded by Rev. Paul R. Barnhart (retired) to supply the work.  Mr. Barnhart served a year and was followed by Rev. M. A. Seper for a year.  At the next Conference session Rev. W. G. Taylor, retired minister and Mission worker, was appointed.  Dr. Taylor retained his residence in St. Petersburg, driving to and from the work which he found irksome, and after a few months asked to be relieved.  Then the Membership and the District Superintendent, preferring a resident minister for Oldsmar, were fortunate in securing the services of Rev. Jos. W. Patton, (retired), of Ohio—a good man, a cultured gentleman and a good preacher.  Mr. Patton completed the year’s work, was reappointed at the following session of Conference, (April, 1938), and is our pastor to date.

The Church has had a struggle throughout the years.  The Depression caused many families to move away, and the several changes in Town Management created an unsettled feeling in others, but the faithful few remaining in the Church, as members and associate members, have been loyal, and they are hopeful for the future of the Church and for Oldsmar.

Mrs. Shumate’s historical sketch gives an overview of the church as well as some facts about the City during this time period.  The original church that was dedicated had  Spanish style architecture.  A few of the original pews from the church are still in use  today.

According to notes by a member of the church, Fred Buckley, the old sanctuary, where Manahan Hall presently is located, served the congregation well for many years until repairs out-weighed a new structure.  Rev. A.C. Riviere instituted plans for a new church in 1956.  Rev. W. E. Bryant completed and dedicated the new church in the spring of 1957.

In 1962, Rev. E. D. Conway thought the old barracks building used as a Sunday School room needed replacing so what is now Manahan Hall was started.  During, Rev. Joe Johnson tenure the building was completed and dedicated in 1966.  Approximately 160 persons attended the regular February family night supper to consecrate the new educational building as Manahan Hall.  Mr. Jim Howie, Principal of Oldsmar Elementary School, acted as Master of Ceremony. Rev. Henry A.  and Mary E. Manahan lived at 606 Washington Street in Oldsmar at this time.  Rev. Henry Manahan was a retired minister of the Detroit Conference who retired from Pigeon in 1956 after 46 years on ministry in Michigan and Ohio.  Mrs. Florence Lamb gave a “Thank You” talk to the Manahans.  Mrs. Lamb said the background of knowledge and understanding and humble spirit made them beloved to all.

Two later additions were completed under Rev. Samuel Montgomery.  A new youth room which joined the sanctuary and Manahan Hall was completed in 1979 and the adjoining house plus two parking lots were obtainedin 1980.

During 1984-1985, a major renovation was instituted, which among other things moved the church entrance from the front of St. Petersburg Drive to either side, reversed the positioning of the sanctuary, and paved the parking lot.

In 1987, the “Teen Scene”, an activity with great potential, was instituted in the small house next to the church, which was a formerly the home of Jim and Gladys Howie.  This house also was used later by the church as a thrift store and was renamed the “Mustard Seed.”  This project was started by Mrs. Betty Saunders.  The Mustard Seed sold items in each room and the money went to help with projects at the church.

Rev. Gary Beam served the church from 1988 to 1990.  Rev. Frank Smith joined us after Rev. Beam from 1991-1993.  Rev. Smith, a Largo native, met some Hospice volunteers in his congregation.  He underwent Hospice training and asked to be assigned to AIDS patients.  By 1993, Rev. Frank Smith had been a minister for almost 40 years, serving traditional congregations while also reaching out to the poor and hungry in this country and abroad, to African American people in the civil rights movement, to Cuban and Haitian immigrants, to migrant workers, and to those with AIDS.  Bob Henderson of the St. Petersburg Times described Rev. Frank Smith’s service as “A lifetime as a “minister of the world.”

Rev. Dr. Sharon Patch joined us in 1993.  She was our first woman minister. During her tenure the church alive with plays, church suppers, and outreach activities for all ages. In 1997, Rev. Dr. Patch started a campaign for a new sanctuary. Adjoining property to the church was purchased so that plans and construction could be started.  It was designed by one of our very own members, architect David Wallace.  The larger sanctuary is modern in design, and it captures the history and essence of our church heritage. The church was dedicated on August 20, 2000 by Bishop C. Henderson.  Our new minister at the time was Rev. Christopher Schmidt who joined our church in mid-2000.  He remained out pastor until being called to start a new church in New Port Richey in mid-2003. .

Rev. Sallie Vandervort joined us in 2003.  During her tenure the church had gone to three services on Sunday. A contemporary service was started to draw new members to the congregation.  Rev. Vandervort remained as our Pastor until June 30, 2015.